Since I've published the Iquique article, I've had something that's been on my mind for a while...

As I was sick and tired of receiving conflicting information, the same night I published the article on Iquique, I typed a letter to the Chilean Embassy in London regarding information about visa entry requirements and the applicable reciprocity fee, because if anyone would know with certainty, it would be a government official of Chile (for example, an ambassador).

Yesterday afternoon, I received a letter from the Chilean Embassy in London and this was the response I received: 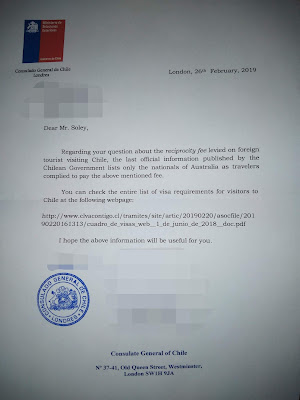 The link on the document is attached here, and I don't speak the best Spanish but I can verify that it does specifically mention that only Australian nationals have to pay the reciprocity fee at Arturo Merino Benítez International Airport (Santiago International Airport) but this also states whether or not you would require a visa or not to visit Chile and what the appropriate cost is for obtaining a visa.